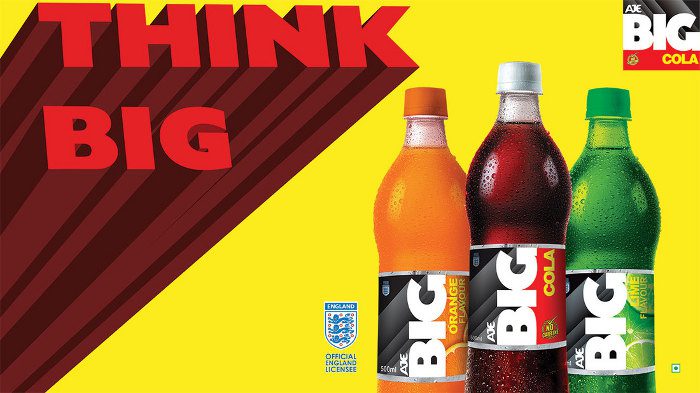 FA Group Head of Business Development, Sean McAuliffe commented, “We are delighted to strengthen our brand presence outside the United Kingdom. Asia is a growing market for us and working on partnerships with brands like Big Cola increases our presence in the region and is a great avenue for our Asian fans to support the team.”

Whilst the Big Cola promotion with the English national team will start towards the end of 2011, Big Cola is currently focusing on promotions surrounding The FA Cup. The FA Cup is recognized as one of the most popular events in Asia and is broadcast widely throughout the region.

According to AJE Big Cola Chief Marketing Executive, Jorge Lopez Doriga, “After a positive response from our Thai customers to the special England National Team promotional packs in 2010—that led to a 20% increase in sales—Big Cola will continue to bring happiness and excitement to all the football fans across the six countries.”

Big Cola recently launched FA Cup promotion ‘Big Cola Be Champion’ in several Asian markets. Through the official rights they secured via TSA, Big Cola has access to the FA Cup marks and assets for use on their product packaging and in advertisements as well as the right to produce co-branded premium items for use in their marketing activities.

“Through this partnership, Big Cola is able to create an emotional link between its brand and millions of England fans across their markets. We are very happy about the great success of the first year’s campaign which was the basis for the extension.” said Marcus Luer, Total Sports Asia’s Group CEO.

In addition to brokering the deal Total Sports Asia also supported Big Cola for the on ground activation in the respective markets such as the official promotional partnership launch events together with an FA Cup trophy tour. It was planned to create a 360 degree marketing campaign that included television commercials, on ground promotional events, outdoor advertising, print advertising and various competition elements.

The partnership launch was attended by representatives from Big Cola and The FA at Wembley stadium in London earlier this year. The promotional partnership period runs through the end of 2012.